Which plaster is best for walls?

Plaster may seem bland, but as we know it can be used to make convincing fake/imitation diamonds …

Where WALLS are concerned, there are many different kinds of plaster, each with its own advantages and disadvantages – below we will review the main choices for internal walls, and comment on which works best in which location.

If you are in the final stages of a self-build or renovation project, it is highly likely that you will be thinking about the different types of plaster available to create the desired impression.

Plastering walls is a skilled job that is generally best left to the professionals, but it’s wise to do some research when it comes to deciding which type of plaster will be best for your home, as some will be more suited to certain types of property than others and it really IS worth the effort to get it right.

While checking that the type of plaster is suitable for the type of house you’re dealing with, it’s also valuable to note that some plaster types are much better for specific wall structures and applications.

Before exploring the many different types of plaster on offer, it is important to look at the differences between more traditional plasters and the modern mixes typically used now.

Lime plaster is made up of a mixture of lime, sand, and water, often with added fibres such as animal hair to strengthen the mix and to ensure a good bind with the walls.  It has been used for thousands of years and, unlike many modern cement plasters, is breathable.

For this reason, it is highly suitable for vintage properties where it can help prevent damp issues and condensation.  It is the ultimate eco-friendly product.  Lime plaster is also flexible so it can cope well with movement in buildings – plus, it has a beautiful soft appearance that does justice to the character of mature properties. 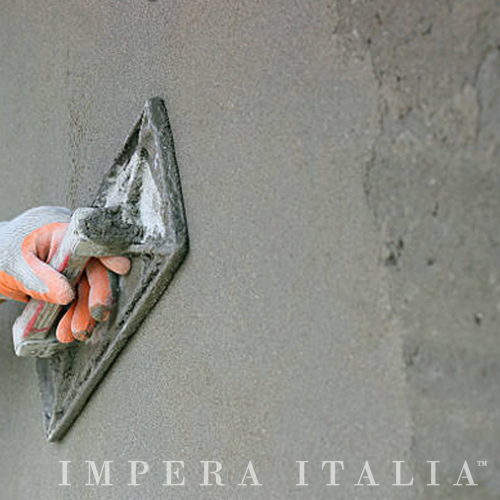 Gypsum plaster, on the other hand, is now the most commonly used type of plaster.  It is made with partially or completely dehydrated gypsum and is often combined with hardeners.

Gypsum is less flexible than lime and far less porous, which reduces its suitability for restoration projects.

However, it’s comparatively perfect for the desirable smooth finishes of modern properties and extensions.  A major advantage is that it takes a very short time to dry.

It is actually hard to put an exact cost on lime plaster as it comes in so many different guises, including pre-mixed and one-coat formulas.  The materials required for each layer also vary.

Unlike lime and gypsum plaster, cement plaster is made from sand, cement and water, and is usually mixed up on site.  Its quick setting times and lower cost make it a popular option, but it should be noted that it is harder to achieve a smooth surface with cement plaster than with gypsum.  For this reason, a gypsum plaster will commonly be applied on top.

The fact that cement plaster is not as breathable or flexible as lime make it unsuitable for period homes.

It is made from slaked lime, marble dust, and natural binders in the mix.  It’s applied over an acrylic primer and protected by a wax coat.

On the downside, Venetian Polished plaster is not an inexpensive product.

One of its main benefits is that it is waterproof and highly durable, making it perfect for all kinds of applications, including wet rooms and kitchens.

It can be applied in a variety of ways to produce a range of effects, from matt to glossy, and even to resemble natural stone or polished marble.

A form of lime plaster, tadelakt is also sometimes referred to as Moroccan plaster and gives a beautiful, rustic finish that is suitable for both traditional & contemporary interior schemes.

Originating in the foothills of the Atlas mountains, it was developed in the city of Marrakech as a flexible material extremely useful for surfacing the ryads which distinguish this region: small interior courtyards with central water features.

Thanks to a renewed interest in traditional and natural types of plaster in recent years, clay plaster is currently viewed as very fashionable in all kinds of property, whatever age.  Clay plaster uses natural clay as the primary binding element, before being combined with aggregates and natural fibres to give it strength.

Although it is a spectaclar option, resulting in a beautiful matt surface which can be left unpainted (often it comes ready-coloured), clay plaster is NOT suitable for areas that will regularly be exposed to water, such as inside showers or behind sink units.

We use cookies on our website to give you the most relevant experience by remembering your preferences and repeat visits. By clicking “Accept All”, you consent to the use of ALL the cookies. However, you may visit "Cookie Settings" to provide a controlled consent.Read More
Cookie SettingsAccept All
Manage consent

This website uses cookies to improve your experience while you navigate through the website. Out of these, the cookies that are categorized as necessary are stored on your browser as they are essential for the working of basic functionalities of the website. We also use third-party cookies that help us analyze and understand how you use this website. These cookies will be stored in your browser only with your consent. You also have the option to opt-out of these cookies. But opting out of some of these cookies may affect your browsing experience.
Necessary Always Enabled
Necessary cookies are absolutely essential for the website to function properly. These cookies ensure basic functionalities and security features of the website, anonymously.
Functional
Functional cookies help to perform certain functionalities like sharing the content of the website on social media platforms, collect feedbacks, and other third-party features.
Performance
Performance cookies are used to understand and analyze the key performance indexes of the website which helps in delivering a better user experience for the visitors.
Analytics
Analytical cookies are used to understand how visitors interact with the website. These cookies help provide information on metrics the number of visitors, bounce rate, traffic source, etc.
Advertisement
Advertisement cookies are used to provide visitors with relevant ads and marketing campaigns. These cookies track visitors across websites and collect information to provide customized ads.
Others
Other uncategorized cookies are those that are being analyzed and have not been classified into a category as yet.
SAVE & ACCEPT
Christmas Break 2022

Our Showroom will be closed during the festive period.
From Wednesday 21st of December.
We will reopen on the 4th of January 2023.

*To ensure that we send out your order before our closing date, we kindly ask that you place it by Sunday 18th of December .